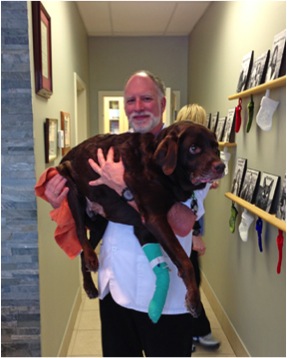 A New Year’s Spent in Hospital by Megan Davis, VA

How did your pet ring in The New Years?  Possibly they were at home, on their favorite bed, sleeping and dreaming of treats and toys.  Or for those of us who went away over the holidays, maybe your pet(s) came with you, and got to ring the New Year in a fun and exciting new place.  Well that wasn’t the case for poor Guinness.  He was at the hospital recovering after surgery.

On the Monday before New Year’s Eve, Guinness’ owners knew something wasn’t quite right with their boy.  He wasn’t acting himself and started vomiting.  It was foamy, bile like vomit. If his owners tried to feed him anything he couldn’t keep it down and would vomit all the undigested food back up.  Maybe just a little bit of an upset tummy?  Guinness’ owners monitored him and how often he was vomiting through Monday night.  At 3am Tuesday morning his owners knew this just wasn’t an upset tummy and something was wrong with their boy, and took him to the Emergency Hospital.  They were suspicious he could have of gotten into something and decided to start a barium series.

A barium series is where we give your pet a special white liquid called barium.  This barium liquid will show up on an x-ray.  We then take a series of x-rays every 30-60mins to see if the barium is passing through your pet, or if it stops or gets blocked somewhere in their stomach or intestines.  This lets us know if they have eaten something that they just can’t pass and it’s gotten stuck.

Guinness was transferred from the Emergency Clinic, and shortly after 8am Tuesday morning, when we opened at North Hill, in walked Guinness.  And it wasn’t your regular Guinness.  Normally when Guinness comes to see us here at North Hill, his tails wagging away, he has a big smile on his face and he’s super happy to see us all , and give kisses and get as many pats & cuddles as he can.  But the staff working that day knew something wasn’t right from the second he came in.  Sure his signature Lab tail was still wagging, but it was a sad wag.  And you could just tell by his face and how he was acting, not your typical happy-go-lucky Guinness, and that he wasn’t feeling good. We continued on with the barium series, took an x-ray, Dr. Kerr checked it over, and there was the culprit.  Guinness had some type of foreign body in his system.  Guinness must have gotten into something that he couldn’t pass through himself and it got stuck and was making him feel sick. 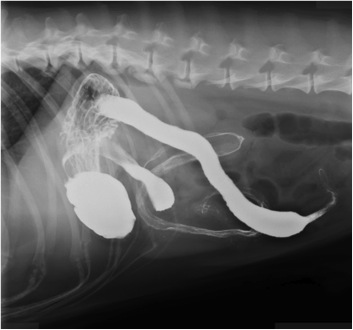 When our pets eat objects they shouldn’t, some of the time they can end up passing whatever they ate themselves.  But sometimes if that object they ate was too big or too hard for them to digest, it gets stuck and the only option is to surgically remove it.  Leaving whatever might be stuck in your pet causes them to get very sick and is fatal for them.  This surgery is called a foreign body surgery.  That’s because most of the time pet owners have no idea what their pet could have gotten into that would be causing a blockage in there digestive tract.  That’s because most of our pets are not only smart but sneaky too, and tend to get into trouble and eat things they shouldn’t when we are not looking. That was the case for Guinness’ owners.  They had no idea what he could have eaten that was causing the blockage, but they knew it had to be removed and fast, before their handsome loveable boy got any sicker. 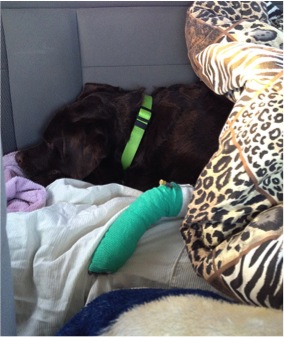 So into surgery with Dr. Kerr Guinness went, to get whatever was stuck, out!!  Guinness had a smooth surgery.  He handled the anesthetic very well and Dr. Kerr found the foreign body quickly and removed it from the handsome guy easily.  It was still a little unclear what he could have eaten though.  It looked like it could have been a fibrous cob or possibly a pine cone.  After the object was removed and the surgery was finished, Guinness had a nice, quiet recovery in one of our dog runs. He was still quite sleepy and hadn’t completely recovered from his big afternoon by the time we closed New Year’s Eve.  With it being New Year’s Day the following day and we were closed, Guinness had to be transferred back to the Emergency Hospital so he could be monitored through his full recovery after his surgery.  His owners came to pick him and bring him back to the Emergency Hospital where he continued to do well but just wasn’t interested in eating.  He stayed at the Emergency Hospital all day New Year’s Day, and came back the following morning to spend the day with us again here at North Hill, so we could keep a close eye on him and make sure his appetite came back.  His appetite improved and he perked up through Thursday and it was finally time for him to go home back to his mom and dad, who spent their whole New Year’s worrying about there “fur baby” hoping that he was going to be alright.  They were thrilled to see him and get to finally take him home.  Luckily for Guinness, he does have has such great pet parents who know him so well and quickly saw something wasn’t right with their boy or he could have gotten really sick, pretty fast.

We saw Guinness a few days later to make sure he was doing well and healing up nicely from his surgery.  It was back to the same old Guinness this time when he walked into North Hill.  Tail was wagging away, his big happy goofy smile was back on that adorable face, and he had kisses to give for any and all takers!! Which made everyone smile.…. Guinness’ parents, all the staff at North Hill and especially Guinness who was happy to be feeling better! 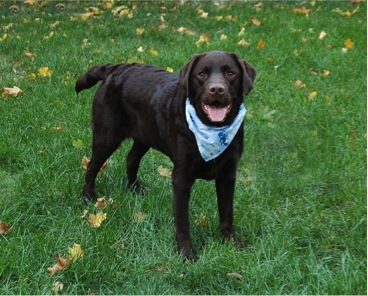 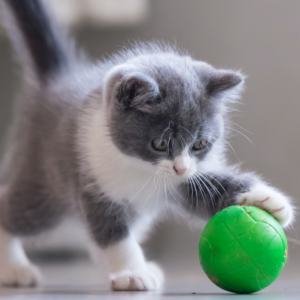 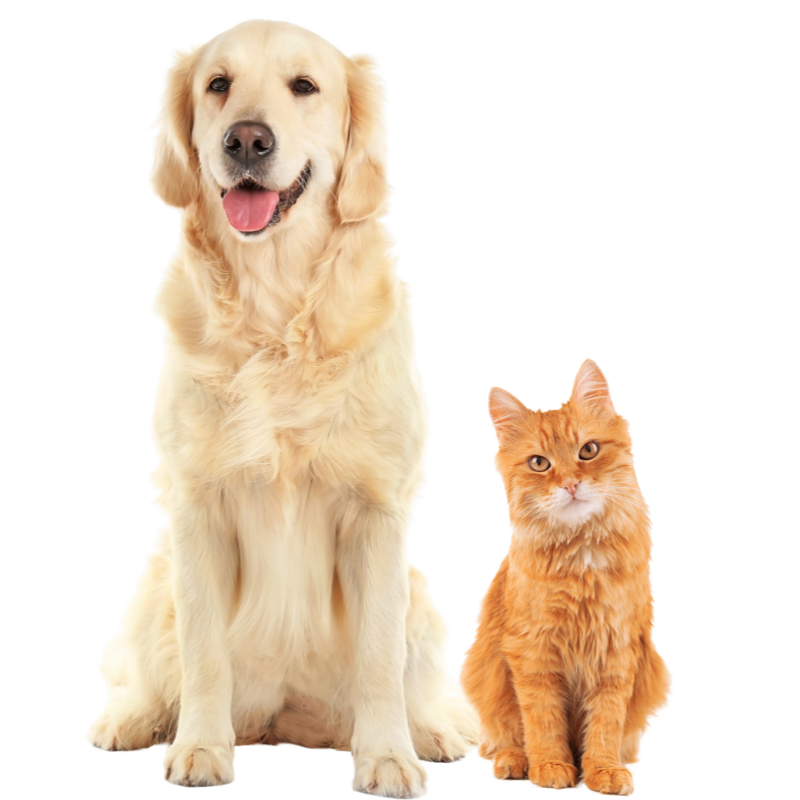